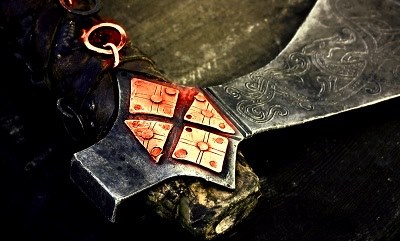 In the first week of January 2019 I had the pleasure of asking one of grimdark’s rising new authors a series of questions. This interview was designed to allow us, the audience, to learn more about Jordan’s inspirations and, for people who are new to the genre, more about grimdark as well. I hope you enjoy! Also, Jordan has a website where you can learn even more: https://jordanloyalshort.com/

“My favorite character is Brohr, the protagonist. He struggles with a messed up family, and has to forge his own path when it turns out that his grandfather, who raised him, is not a good person. The worldview he has been taught is poisoned by this relationship, and Brohr has to figure out for himself what to do with his life, and what is right and wrong. Brohr’s grandfather makes a pact with something evil, and learns how to bind him to the spirit of his dead twin, leaving Brohr haunted, his possessions manifesting as bouts of berserker fury.  Brohr wants to break free of his grandfather’s sinister manipulations, but a really cruel writer keeps throwing roadblocks at him until he snaps.”

“There is a lot of really amazing Grimdark stories. Still, my favorite is what got me thinking about it as a genre. That was Joe Abercrombie’s First Law Trilogy. They’re spectacular books with great characters that drive the plot and really live off the page. Abercrombie makes for a pretty good gold standard by which to judge the genre. Now I think the challenge is to find interesting ways to match that tone and depart from some of the conventions that have since been copied a lot of are starting to become cliché. Glen Cook’s Black Company series is another classic that pulled me into the genre. Probably the best grimdark book I read in 2018 was We Ride the Storm by Devin Madson.”

“I’ve always had an outlook on life that’s not entirely rosy. I gravitate towards stories that don’t shy away from the darker aspects of life. Which is not to say that I think the world is unremittingly dark, or that fiction should be hopeless or jaded. I just like stories that don’t cut away when things are at their worst. And I think the very best stories find a way to come back from those dark places instead of giving up. That’s what I want to do, don’t sanitize, and don’t throw in the towel when it seems impossible to enact meaningful change.”

“Yes and no. Not everyone is a total piece of shit that is only out for themselves. A lot of grim dark stories take this too far and it undermines their realism. Ignoring the root question of whether there really is a moral compass to the universe, people are raised with beliefs, and they often stick to them even when the going gets rough and it’s against their best interests. On the other hand, a lot of epic stories have silly contrivances like when the hero won’t tell a lie to prevent genocide. That guy needs to get his face rearranged by an axe. In my opinion, someone who will make such a compromise is a hero, whereas someone who won’t has an inflated opinion of their own importance. I also find it pretty frustrating when conflicts hinge on what I feel amounts to an absurdity. All sins are not equal. It’s ok to brain the evil wizard when his back is turned to save the orphanage from his dastardly spell. Reading about characters that feel like platonic ideals instead of conflicted humans is dull. Having a character battling themselves to discover the “right” thing to do is great, but when it lapses into hyperbole I tuned out.”

“I think it’s largely an issue of tone. The themes will be darker, the characters generally morally gray, the prose somewhere between the succinctness of cleaver and the ornamentation of goth poetry. Grimdark readers love anti-heroes and heroines. We love grit. Give us the real dirt on what the protagonist did during “the war” that left him disillusioned. We don’t have perfect faith in institutions or people and we want to explore the disconnect between the pretty picture we’re spoon-fed and the real gory details of how the sausage is made.”

“Expect grimdark to mature into a wider variety of themes. I also think it’ll pivot more towards nobledark, which has the same grim setting elements, but in which the characters strive toward more altruistic ends. You are already starting to see a lot of that. You can sustain the mood of grimdark, and open up the genre to a wider audience, at the same time giving the author more creative freedom when characters transcend the motivations of self-interest.”

Medieval Realism in Movies (Response to Tod of Tod’s Workshop)