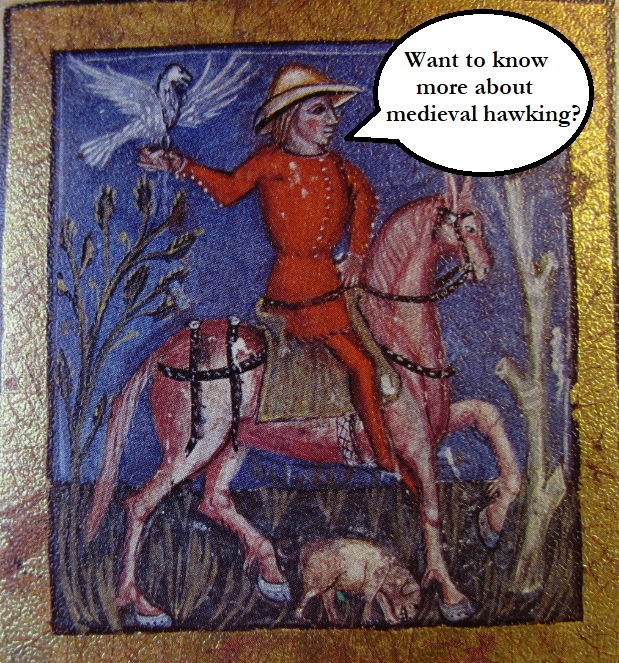 Medieval Hawking & Falconry: Hunting with Peregrines in the Middle Ages

The Story of the Falconer: The Art of Hunting with Birds of Prey, Raptors and Predatory Birds in Medieval Times

In a time before accurate guns, hawking and falconry were the best means of catching avian prey besides the odd “lucky bows-shot” or trapping, and falconers put many delicacies on the tables of aristocratic families (Almond 20). But because of the cost of equipment and the vast amounts of time needed to train predatory birds for hunting, hawking was deemed an “upper-class sport” (Almond 20). The female falcon was favored over the male hawk or tiercel because they were larger and fiercer (Almond 20). The kinds of quarry peregrines would catch were partridges, pheasants, cocks, ducks, bustards, geese, herons, snipes, cranes, mallards and larger falcons would even hunt rodents such as hares (Almond 20, 21). Also, smaller predatory birds like the merlin were useful for hunting smaller birds like larks, and the lark tongue was a delicacy among nobles and wealthier townsfolk (Almond 21).

Because of the nature of training birds of prey, hawking was much more difficult overall than hunting deer (Almond 21). However, hawking was also more leisurely, safe, solitary and peaceful than the mounted chase with hounds and spears, which is why the mounted chase was a useful exercise for military training while hawking wasn’t, and why hawking was a sport enjoyed more by elderly and feminine hunters (Almond 39, 40). One major drawback of hawking, however, is that hawks moult once per annum between May and August, unlike hounds which can hunt year-round (Almond 40). With this said, though, a trained hawk was still more valuable than a single hound and high-bred birds of prey were often given as gifts to kings and used to pay hefty ransoms, as the trained peregrine was the falconers most treasured possession and one of the merchant’s most costly trade goods (Almond 40).

The Forest Charter of 1215 in Norman ruled England allowed every free man to have an eyrie in his woods where he could lawfully take nestlings to train for the hunt, whereas before it was a crime punishable by blinding for a commoner to take a nestling from an eyrie without permission, as hawking was a sport reserved for the elite (Almond 41).

Because trained peregrines were so highly regarded, they went with their owners everywhere they went, even to church and on long-distance travel (Almond 42). A fabulous story to illustrate this is King Henry II’s jaunt at Clares’ Pembroke Castle in Wales. Henry II brought with him a high-born Norway hawk and for sport he set it against a wild falcon perched on a crag (Gies 129, 130). Surprisingly, the wild falcon became the assailant and Henry II watched his royal bird land dead at his feet (Gies 130). From then on the king made sure to regularly send for the young falcons bred at those same cliffs in South Wales (Gies 130).

There were many different birds of prey used for hunting, and the famous Boke of Saint Albans written in 1486 catalogues and assigns each bird to a specific social status (Almond 43). The most notable hunting birds were the peregrine, gyrfalcon, saker, lanner, alphanet, merlin, hobby, goshawk and sparrowhawk (Cummins 191-194). The training of these birds, as mentioned, was difficult, expensive and time-consuming, which is why the falconer was a life-long career and almost every aristocratic household had one in their employ (Cummins 200). “Eyasses” were baby hawks taken from nests for training, and they were put into a hack house where they lived (Cummins 200). A falconer’s tools for training and hunting included jesses, creances, leashes, bells, ornate leather hoods to cover the birds’ eyes, artificial lures to recall the birds, a talent for making bird calls and, of course, the perch and glove (Cummins 200-202).

Sometimes birds and dogs, typically the greyhound, assisted each other on the hunt for ground quarry and they were fed together to promote their comradery (Gies 133). Either the dog would chase rabbits out of the bush and into open plains for the birds to catch them or the bird would circle above the prey when the dog lost its scent (Gies 133).

An in depth reading of the sources could give the reader much more detail into the art of medieval hawking and falconry. But it’s already splendid to imagine, now knowing the prevalence of this aristocratic pastime, how often we might have seen highly trained hunting birds accompanying travelers on the road. Wouldn’t it be amazing if it was common for us to keep trained falcons with us at all times today?

Cummins, John. The Hound and the Hawk: The Art of Medieval Hunting. Weidenfeld and Nicolson, 1988.

One thought on “Medieval Hawking & Falconry: Hunting with Peregrines in the Middle Ages”