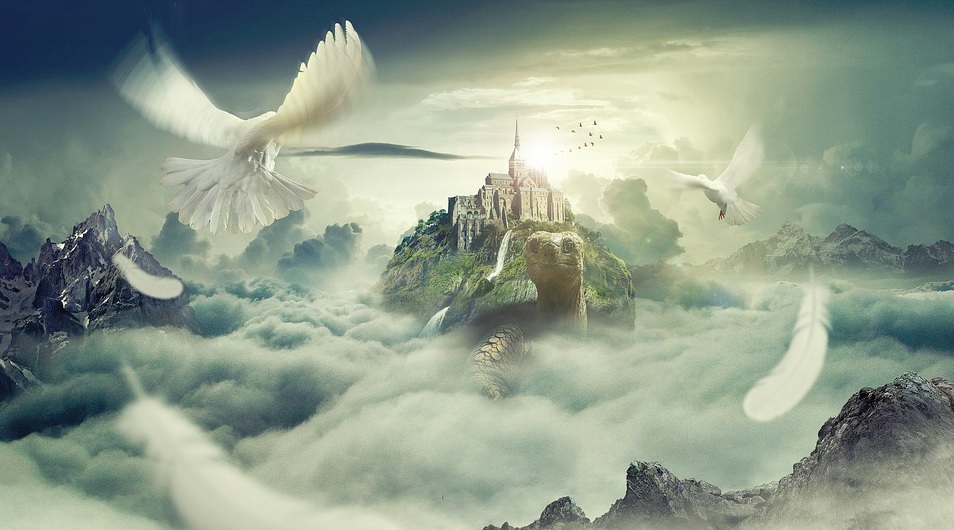 True Origins of the Fantasy Genre: Where Did Fantasy Come From?

The Historic Origins of the Fantasy Genre Explained!

Some questions answered here: When was the fantasy genre invented? What was the first fantasy book? How have fantasy books evolved throughout history?

George MacDonald is often credited as being the first fantasy author. Although he was born in 1824 and his works are much older than J.R.R. Tolkien’s or Michael Ende’s, flaunting MacDonald as the founder of fantasy is misleading and doesn’t explain where fantasy really came from. Today I want to talk about the origin of fantasy in a broader narrative, starting with the oral storytelling traditions of the ancients and ending with Michael Ende’s The Neverending Story.

Whether it’s biblical stories of the Flood or Homer’s Odyssey, people of yore have been sharing stories with fantastic elements since before people could read or write. Oral histories have always been important for ancient cultures, and during the Great Migration of Late Antiquity and the Early Middle Ages sharing oral histories was one of the more effective ways to solidify cultural identities. Germanic legends of the hero Siegfried and Celtic legends of the hero Cú Chulainn are precursors to the later medieval tradition of writing fantastic stories in vernacular books for wider audiences. Medieval people believed that the fantastic, that is things like dragons, Roc and blemmyae, lived far removed from urban areas, and stories like Beowulf and Sinbad the Sailor reflect this as these heroes must travel far from their homes to meet the fantastic face to face.

Even in later medieval chivalric epics like the Song of Roland the heroes are faced with more giants and more magical objects of enchantment the further they get from their homes, and the whole concept of “adventure” (echtrae in Irish, aventiure in German or ad venire in Latin) was born from this chivalric epic tradition, as expressed in Parzival when he must unknowingly joust against himself because the quest is a journey of self-realization and adventure is something that literally “comes at you.” Stories such as all these mentioned above are from humankind’s need to tell and hear stories, but the real tradition of the fantasy genre as we know it had yet to develop because when medieval people told stories of the fantastic they generally believed it was real, unlike the modern human who knows it’s just fantasy.

Oral storytelling continued out of the medieval setting and into the lives of early modern folk, as “witch hysteria” spread horror stories about werewolves and wet nurses shared age-old folklore around the hearth. It wasn’t until the early 19th century that the Brothers Grimm transcribed these early modern folk tales by interviewing domestics around rural Germany, and in 1812 they published a collection known as the Grimm’s Fairy Tales. They did not expect their work to become so popular, and around the same time other Romantic writers experiencing the Gothic Revival began to critique modern civilization by stating that too much sophistication had allowed us to forget about the fantastic and that it was important to save our own humanity by re-inserting the fantastic into civilization via the Gothic fairy tale, or Märchen as it was called in German. In 1846 Ludwig Tieck’s The Elves was more than just a Gothic fairy tale; it was a critique on modern civilization, critiquing the same problems of humankind that Michael Ende’s The Neverending Story later critiqued in the 20th century.

“The departure of the elves” is a common phrase embodying the problems of modern humankind, stating that people no longer believe that myth is real and so the elves have literally left us to suffer on our own. Only the child still has the ability to believe in fairy creatures and therefore the creative imagination of the child is humanity’s savior. This theme is captured beautifully in The Hobbit, as the hobbit itself symbolizes the child and the need for fantastic adventure. Throughout ancient and medieval tradition the fantastic has always existed outside the walls of cities, but in Gothic fairy tales of the 19th century the fantastic exists in parallel worlds that are completely separate from our own, and this separation of worlds in itself is a theme to symbolize our estrangement from the fantastic. In The Neverending Story, Bastion the protagonist realizes he is a character in Fantastica and the fantasy creatures there need his help because in order to exist they need a human from the real world to believe in them. But these early fantasy stories which have spawned from the Gothic fairy tales of Romantic writers contain more than just fairy tale elements.

Fantasy is a blend of heroic epics of the Great Migration, a blend of chivalric epics from the High Middle Ages and a blend of 19th-century Romantic idealization of the Middle Ages all in one genre, hence its constant allusions to the idyllic castle, chivalric knights saving princesses from dragons and heroic kings invading kingdoms. In other words, fantasy is a hybrid of many old storytelling traditions. It originally strived to re-insert the fantastic into a modern world where science had cursed us with the ability to no longer believe in myths. Fantasy was born out of the Romantic thinker’s need to experience the fantastic in an age of industrialization and environmental pollution, when the fantastic had the potential to provide escapism at a time when it was needed most. Today, in the 21st century, fantasy still plays this role, allowing children and many adults to escape and explore worlds of elves, dragons and the very selfsame mythical monsters of the Middle Ages that people once believed in.

The themes discussed here are just the crust of the bread. It’s extremely fascinating to delve into the world of the Gothic fairy tale writers and try to understand what exactly they were doing. Even before the age of Romanticism, Horace Walpole’s The Castle of Otranto in 1764 re-inserted the fantastic in a medieval setting as the first Gothic novel. Similarly, the 19th and 20th centuries saw many advancements in literature regarding fantastic elements, from W.Y. Evans-Wentz’s Fairy-faith asserting that fairies were real to J.R.R. Tolkien’s On Fairy-Stories and Vladimir Propp’s The Morphology of the Folktale spelling out for us all in great detail the immense value that the fantastic has for modern civilization. One must only wonder for a moment why fantasy can never leave the medieval behind before we look back at everything that evolved in the literary world up until this point–everything from the Disneyfication of fairy tales to the advent of Grimdark and LitHEMA–and realize that the medieval is still here; it has never left us. And in a time when humanity is threatened by technology there always exists an inherent need to escape into an idyllic past, where the fantastic never fails to sweep our breaths away.

I want to thank all the lovely folks who make the Germanic Studies and the Medieval Studies programs at the University of Victoria possible. You have opened my mind to the wonders of the mythic past in ways I never could have done on my own. Thank you!

One thought on “True Origins of the Fantasy Genre: Where Did Fantasy Come From?”