Rule 1. SHOW HEMA IN ACTION: Grappling! Rondel daggers! Poleaxes! Niches in armor! LitHEMA, although some authors may or may not choose to use Old German or Old English, takes pride in showing historical action for what it is! As all of you will one day come to agree, many fantasy stories, whether they be movies, games or books, repetitively fall for the same myths and misconceptions. Type “drawing swords from the back” into YouTube and you’ll see exactly what I mean. Don’t forget to subscribe!

LitHEMA separates itself from most fantasy by dutifully straying from misconceptions. A lot of the history we know as true is, of course, speculation made by experts and archaeologists and likewise LitHEMA writers must rely on creativity to fill certain gaps, allowing us to create the most awesome and realistic sword fights ever! It’s reenactment for the mind, baby! Yeah!

Imagine a lord in his prime, a master with a sword in the Late Middle Ages. He’s been using the same lifesaving techniques with his one-handed sword for many years and must suddenly duel an angry levy who’d picked up a deadman’s zweihander! The sparks! The grunts! The parries! It’s experience and swiftness versus revenge and strength. And you can’t deny it’s beautiful because, as Shad from Shadiversity says, swords are awesome!

Rule 2. PRESENT TRUTH, SAVE THE ODD EXAGGERATION: Gobs of HEMA practitioners admit that fantasy is what got them interested in swords in the first place. And so in that sense LitHEMA respects its roots in more ways than one. LitHEMA respects fantasy as much as it respects historical combat treatises because we all must rely on creativity and fascination to assume certain things about history. Indeed, all we can do about certain things is make assumptions, about certain unprovable things which almost always rely on context like ‘why did falchions become popular?’ or ‘how easy is it to shoot a moving target with a crossbow from a tower?’.

It’s impossible to be perfectly accurate, but that wouldn’t stop a LitHEMA writer from replying ‘well, what period are we talking about? What type of crossbow is it?’ LitHEMA distinguishes itself from most fantasy subgenres by being as realistic as possible and the writer must present, after much studying and research, what she thinks is realistic. She decides, ‘The moving target below the tower is wearing a gambeson and the crossbowman’s quarrel glances off the sturdy textile because it was a low-poundage crossbow and the quarrel didn’t hit plumb.’

Some historians may say that scene should have happened a different way, but our author dug down into her heart, did her research and presented what she thought would really happen in her fictional universe. Even if she has magic and elves and dragons in her universe, which is more than possible in LitHEMA, she has to ask herself ‘would the dragon’s flame really burn down a castle made of stone? And would elves really use war bows if they had flimsy little arms?’

Thanks to the internet and many hard working enthusiasts around the world, authentic historical artwork is slowly and steadily putting a burdensome responsibility on the shoulders of writers! We feel guilt when we realize our heroes were wearing unriveted mail when they should have been wearing riveted mail. Trust me, as a passionate LitHEMA writer I know that guilt all too well. My older stories have many things that are unrealistic, like a disposable diamond-tipped throwing knife. At least I stated that the blade had to go through mail and gambeson. 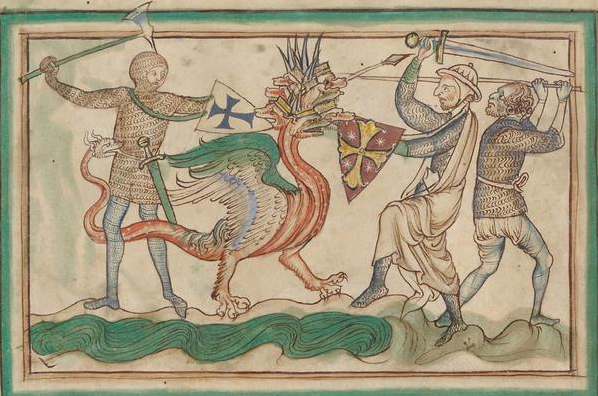 Rule 3. SUGGEST CONTEXT: Medieval combat treatises teach us many tricks and techniques, guards and attacks, but they tell us very little about the context in which these tricks and techniques could have been used throughout history. To understand context we must coalesce our HEMA knowledge with other sources like written accounts and paintings. LitHEMA is just one medium that enables us to use our historical research and creativity to suggest certain scenarios.

Now imagine a small peasant revolt, an entire village raging against sixteen knights trained in the combat techniques of a master. Written with HEMA in mind, this imaginary scene could allow us a special viewpoint, a viewpoint very unlike a battle in a 1970s fantasy book. Of course, it is inevitable that creativity will fill many gaps, but after studying the artwork left by ancient, medieval and pre-modern cultures around the world we can create a reenactment-like image in the reader’s mind. While suggesting a context, LitHEMA can indeed show the world what mortal combat may have looked like in the past. Frankly, a movie based on a such a novel is exactly what Hollywood needs.

Shot out to http://wiktenauer.com and all you HEMA enthusiasts out there!