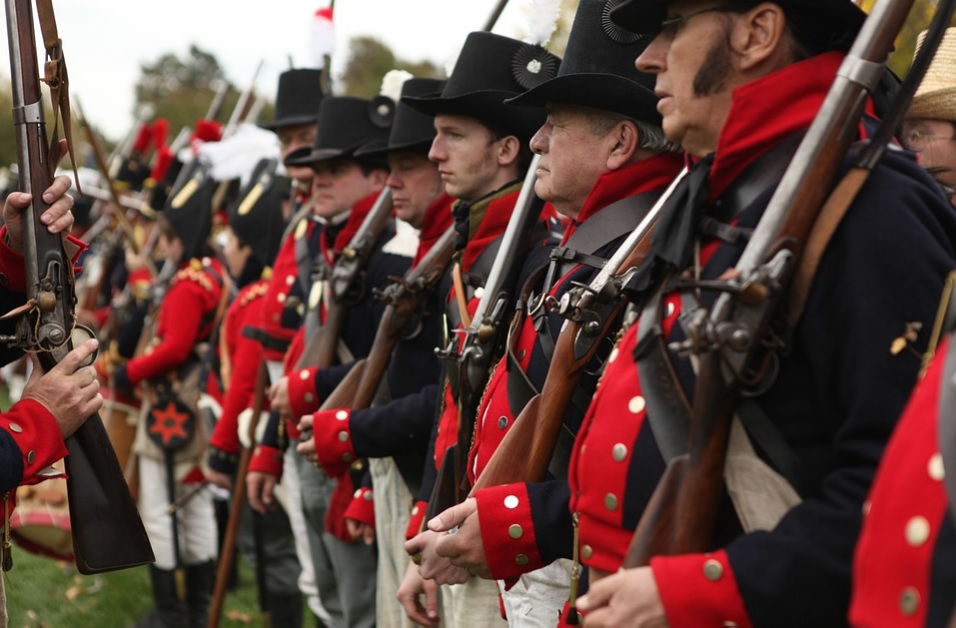 Part of the research I had to do for a book included learning how ‘muzzleloaders’ operate. So now I’ll briefly share what I’ve learned.

Muskets or any flintlock firearms are generally always reloaded via the muzzle like a cannon. First, a ‘powder horn’ or ‘powder flask’ is used to pour ‘grains of shot’ aka gunpowder down the muzzle and into the bore where it settles at the breech. Experts may be able to eyeball how much powder’s needed for a successful ‘fire’, but many people use a ‘measuring flask’ in order to make sure the correct amount is inserted. For many later muskets, 100 grains of shot is recommended.

After the gunpowder is inserted, a cloth wad is placed on the muzzle and then the lead ball or bullet is placed on top of the wad. The wad isn’t always needed, but it helps to make sure the ball’s airtight within the barrel so that it won’t come rolling back out. The wad also helps to secure an airtight chamber in the breech which ultimately makes the ignition more effective. The detachable ‘ramrod’, which is usually always conveniently ready to withdraw from a tube underneath the barrel, is used to tamp the lead ball down the barrel until it’s snug with the powder in the breech above the trigger and below the pan.

Once the ball’s nice and snug, the ramrod is reinserted into its holder. The reloader then needs to ‘prime’ the gun before he or she can fire it. This is done by lifting up the mechanism known as a ‘frizzen’ where the abovementioned dish-like space known as a ‘pan’ sits underneath. A secondary smaller powder horn known as a ‘priming horn’ is used to fill the pan with a finer version of gunpowder known as ‘primer’ or ‘priming powder.’ It’s important that primer is put into the pan because primer contains less saltpeter aka potassium nitrate than normal gunpowder. Unlike your typical, coarse gunpowder, primer is smokeless when it ignites, and since the pan sits close to the operator’s eye when he or she is aiming, you can imagine why it’s a good idea to have a smokeless ignition. But of course in times of war, getting a shot off no matter what is far more important than avoiding smoke in your eye and so normal gunpowder also served as primer if needed. Primer is also much finer than regular powder. That means primer can catch a spark more easily and therefore acts like an engine’s spark plug, while the normal gunpowder in the breech is the car’s gasoline, so to speak.

Once the pan is primed, the frizzen is locked down to cover it, protecting the primer from the elements. The next step is to pull back the ‘cock.’ The cock is the hammer-like mechanism attached to the trigger that holds the flint. Once the gun is fully cocked, all the operator needs to do is aim and pull the trigger. When the trigger’s pulled, the cock snaps forward, smacking the flint against the frizzen. The frizzen unlocks and opens up from the force, revealing the pan. This allows sparks from the flint to simultaneously fall into the pan and ignite the primer. A hole in the bottom of the pan allows the gunpowder behind the lead ball to also ignite forthwith. And presto! If everything is dry and loaded correctly, the bullet should zoom out posthaste. But aiming is a different story.

How fast could a soldier reload a musket?

Do you enjoy historical accuracy in fiction? Join my newsletter for future book launches.