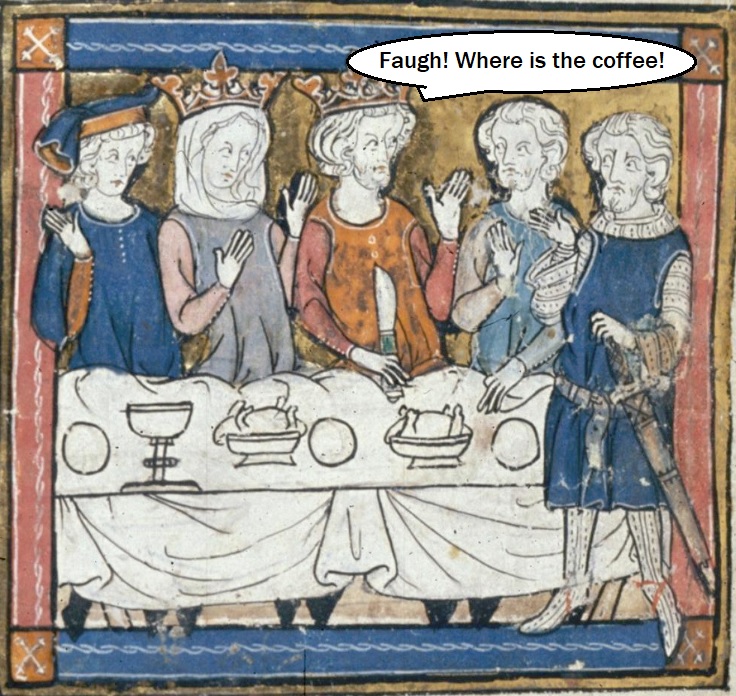 Today the word “breakfast” gets shuttlecocked across American streets like coffee. Ah, there’s nothing like a mug of coffee at 4 AM with some jazz music. Coffee’s good with breakfast, too. Hey, wait. Is that why we don’t have much evidence of people eating breakfast in the Middle Ages?–because they didn’t have coffee? That’s a deep, sociological question. Today, I just want to answer the question “did people eat breakfast in the Middle Ages?” Unfortunately, I won’t be able to say a definitive yes or no. There are hundreds of different answers, for the Middle Ages is a span of 1,000 years and encompasses much of the globe. I also won’t be saying what they ate, for that will require another post which I’m working on… So let’s begin.

It goes without saying that medieval people in general ate a lot less than Americans do today. Without fridges and a lack of advanced food-preservation, most people in medieval times, especially indentured people, didn’t have an easy means of making a meal before going to work, at least not as easy as many of us have it today. If they didn’t keep the fire burning all night, they would have to make one with a tinder box or use an ember from the neighbors to cook a meal. Fire is precious! Households with grooms might use fire for other purposes besides cooking, too, like warming spiced wine and bath water. Where a fire is nowhere near, however, any form of liquid might be all a person needs to begin the day, assuming no bread or preserved food was near too. But what about other people?–priests, soldiers, housewives?–did they always have their first meal of the day early in the morning like modern people?

Employers with the means to have a meal ready at the early moments of the day generally had breakfast earlier than people who had to do everything themselves. What we do know for sure is that many indentured workers were given nuncheons (snacks) as part of their wages. These nuncheons would be eaten during fast breaks before dinner, a large midday meal, and before supper, a second meal for after the day’s work was through. Generally, dinner and supper–two large meals instead of three–was the norm throughout medieval Europe. But what about breakfast? 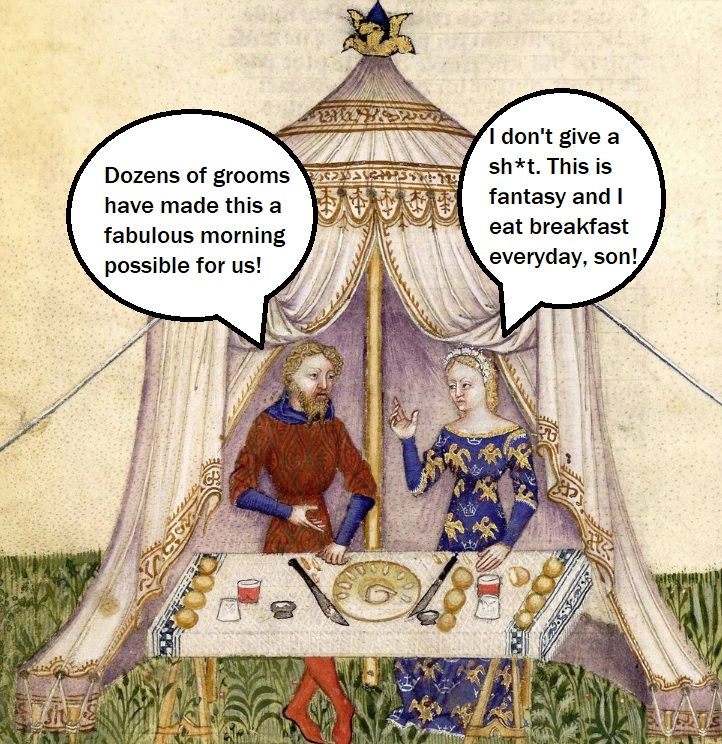 When speaking about the monastic and much of the familia in general, it wouldn’t be sensible for us to dispute the broad statement that there was a custom of “fasting piously” during the night. You definitely weren’t sinning if you skipped breakfast because you didn’t break your fast. Monks ate “collations” and then read Collationes by Cassian, and they would pray for forgiveness if gluttony was the first sin they committed in the morning. There’re much more important things to do like witness God’s word! Veni Sancti Spiritus! Then again, every priest was different. Corrupt ones might not have a second thought before delving into the larder for some cheese and butter in the dawning.

Armies on campaign carried a lot of preserved foods like biscuits and salted meats. Whatever the armies’ priorities were, breaking fast early in the day wasn’t a necessary given for any soldier. It took organization and order to issue meals to the entire army, and there might be more serious things to spend time organizing against when on campaign than breakfast. On certain campaigns, food might come as an extreme luxury during all eight hours of the day (Matins, Lauds, Prime, Tierce, Sext, None, Vespers, Compline). But this doesn’t speak of what might go on in the pavilion of a knight or a baron when they rise in the morning on campaign, because, once again, those with the means to have others do things for them probably had breakfast sooner and more often than people who had to cook for themselves.

Did the sick and diseased eat breakfast in the Middle Ages?

We know for sure that breakfast was often given to the infant, the sick and the elderly by caretakers to help regain and maintain strength. If you were a healthy adult, you might be seen as weak for needing a breakfast depending on the context. The reason I speak so generally is because obviously customs in 10th century Paris where life was rough were a lot different than 15th century Florence and Venice where people on average ate very well, perhaps better than we do today in some cases.

Did medieval people living in the country eat breakfast?

In a typical household somewhere in the European countryside during the Middle Ages, if you had some instant food you could eat in the morning before work like bread or vegetables that didn’t need to be cooked, or indeed leftovers from yesterday’s supper which had been kept warm next to the fire overnight, it might be wiser to save these foods for today’s supper anyways, especially if you had other people to feed. But it shouldn’t surprise anyone if people had a quick bite of some bread or leftovers before heading out the door in the morning, especially if their stomachs were grumbling.

In the average household of medieval cities, it was the wife’s job to go to the market almost every morning to get ingredients for the meals her family would have that day. This practice is a direct consequence of having a lack of ways to preserve food. Today, we can make breakfast in two minutes. In feudal society, there were only so many roles dedicated to preparing and cooking food. This same world had even fewer sinks, towels and soaps.

Also keep in mind that people went to bed when the sun set and rose from bed at sunrise because sources of light were expensive and many medieval cities had curfew laws, so the markets of a medieval city would be bustling much earlier in the morning than malls do today. Therefore, if a medieval family did coordinate a breakfast it would look nothing like the kind of family breakfasts you see on television. The husband, who was most likely a guild member and a master or apprentice at some discipline, would be out the door at cockcrow, if his shop was not connected to his home like many medieval shops were.

It’s also wise to keep in mind that the wealthier you were in medieval times the less carbohydrates you ate, you had to be somewhat well-off, at least not a cornfed simpleton, to afford a family home in the city. Today, most Americans eat mostly carbohydrates which provide 3x less energy than fat. So medieval people might not even be hungry in the morning if they had a fatty supper the night before. Personally, since I’m on the ketogenic diet, I can understand why breakfast was unnecessary for people who ate mostly meat in the Middle Ages, which wealthier folks in 14th-century Venice actually did.

Almost every small thing we take for granted when it comes to making a quick breakfast today didn’t exist or was very rare in medieval times: electricity, running-water, transportation. Now ask yourself, if you didn’t have a steward and dozens of grooms to manage your fires, your laundry, your water-supply, your waste-management and so on, would you have breakfast? Or would you maximize the efficiency of your time by getting your arse to the fields?

In medieval records we have gobs and gobs of accounts of people having supper but very little of people having breakfast, and I think that’s for a good a reason. To wrap things up, let’s just say that the way breakfast is treated in today’s Western culture didn’t exist in medieval times.

Do you appreciate respectful treatment of historical customs in medieval fiction? Subscribe to my newsletter for future book launches!

5 thoughts on “Did People Eat “Breakfast” in Medieval Times?”