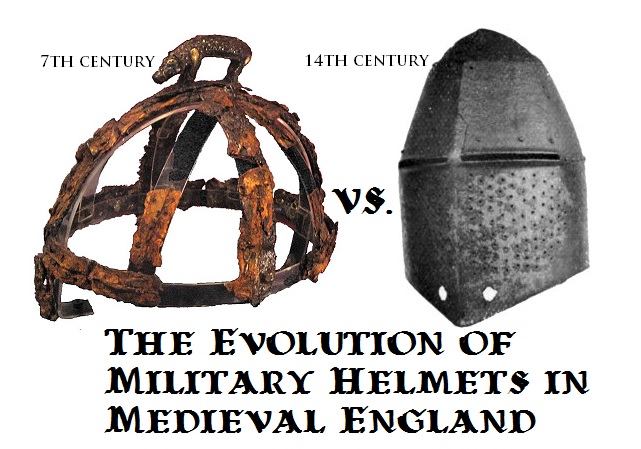 Evolution of Helmets in Medieval England

The Evolution of Military Helmets in Medieval England

To understand why and how military helmets evolved in medieval England this paper will analyze key details of two helmets, namely the Benty Grange helmet, a seventh-century Anglo-Saxon artifact, and the Pembridge helmet, a fourteenth-century English artifact. Key details include construction methods, construction materials, defensive features and iconography, which if analyzed together can help to explain why the design of helmets changed so dramatically over this seven hundred year gap of time.

Although seven hundred years separates these helmets historically, only one hundred and twenty-nine miles of modern roadway, according to Google Maps, separates the sites of their original interment, those being Benty Grange and the Hereford Cathedral.

Comparing only two helmets limits the insight we can draw from this analyzes, especially because both respective centuries had many different designs of helmets, but some insight can be drawn from this comparison nonetheless, so let us begin. 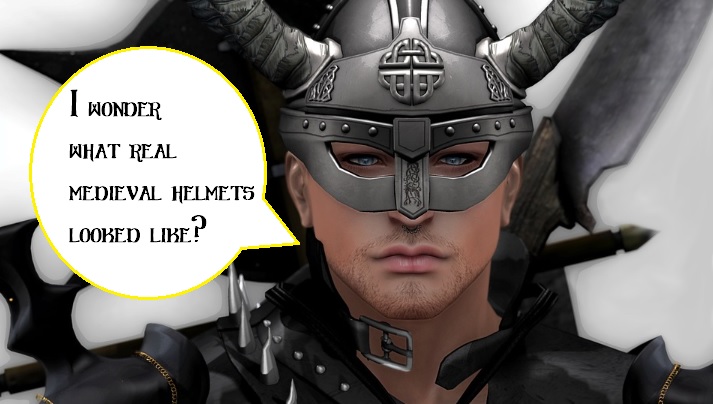 Excavated in 1848 by Thomas Bateman from a barrow on a Derbyshire farm,[1] the Benty Grange helmet consists of a metal frame supporting horn plates.[2] It has a boar finial on the crest and a silver Latin cross on the nasal guard,[3] which means it has both pagan and Christian elements. This crossover of faith tradition on the Benty Grange helmet should not surprise us because seventh-century England was still in a conversion phase, and many other contemporary items like high crosses and manuscript marginalia also show this mixture of pagan and Christian elements. The maker and wearer of the Benty Grange helmet are unknown, but considering that it was buried in a barrow, or in other words a human burial, might suggest that the helmet was actually worn by a warrior, who would have been cremated, and it had a practical function and was not just simply used ceremonially, although this is conjecture.

The Pembridge helmet, however, comes to us with a lot more information and little conjecture is needed in its analyzes. Today, the Pembridge helmet is held in the National Museum of Scotland (reference number: A.1905.489), and according to the National Museums Scotland website, Sir Richard Pembridge (d. 1375), the helmet’s original owner and wearer, was a knight of King Edward III and fought in the Hundred Years’ War.[4] The Pembridge helmet is classified as a “great helm” and is characteristic of other great helms of the fourteenth century, although this one in particular is constructed with three plates of steel held together with rivets.[5] The inside being lined with padding of either cloth or leather and possibly worn over a cloth cap and chainmail hood, the Pembridge helmet was attached to the breastplate via chains passed through two cruciform holes near the bottom of the helmet’s front side,[6] giving a physical function to frontally displayed Christian iconography which must then have an apotropaic function due to the cross’ religious significance.

Unlike whoever wore the Benty Grange helmet, we can more easily assume Sir Richard actually wore his great helm in battle because it was placed above his tomb in the Hereford Cathedral “as a reminder of his military distinction.”[7] Also unlike the Benty Grange helmet, the finial associated with the Pembridge helmet was removable, and rather than a boar the Pembridge helmet finial was Sir Richard’s distinctive crest, a sheaf of wheat.[8] While the Benty Grange helmet does not cover the whole face but only protects the sides and top of the head, as well as the nose due to its nasal guard, Sir Richard’s great helm protects the entire face and the front is mottled with small holes which allow for easier breathing. Also, the two larger cruciform holes may have made it easier for Sir Richard’s voice to be heard.

Perhaps the most historically significant distinction between these two helmets is that one has both pagan and Christian elements and the other does not. Even though this should not surprise us, the historical significance is undeniable, as it gives us insight into the way the two owners thought and conducted their lives. Clearly by the fourteenth century, by the evidence of the Pembridge helmet alone, pagan iconography was no longer a part of the military caste’s visual language, and clearly in the seventh century, by the evidence of the Benty Grange helmet alone, pagan iconography was still a part of the military caste’s visual language. This might then allow us to assume that whoever wore the Benty Grange helmet might still have had some pagan beliefs, whereas Sir Richard was purely Christian. The reason why we know the boar finial on the Benty Grange helmet is associated with paganism is because boar iconography has been found on pagan objects time and time again, such as the sixth- or seventh-century Guilden Morden copper boar or the seventh-century Sutton Hoo purse-lid, and we know from early medieval literature such as Beowulf that the boar symbol was apotropaic and offered protection against sword strikes.

Great helms and other military objects such as swords of the Late Middle Ages, like the Pembridge helm, also had these apotropaic features via iconography, albeit in the form of the cross. But, when no longer considering apotropaic iconography, what physical features of these helmets offer real protection? One reason why the Pembridge helmet had a removable finial and the Benty Grange helmet had a fixed finial may have to do with the evolution of the kinds of weapons these helmets were going up against in battle. Scholars know that by the Late Middle Ages various new forms of polearms had been introduced, such as the halberd or fauchard, and often these later polearms have hooking elements. In a sportly tournament a knight such as Sir Richard might wear his finial in order to be more easily recognizable among the audience, but in a real battle it would be a mistake to wear a finial precisely because of the hooking elements of the weapons a knight would have to fight against. If Sir Richard wore his finial in battle it would be possible for an enemy to hook him and either pull him off his horse or control him thus. However, Anglo-Saxons in the seventh century had less need to worry about such hooking weapons, especially as the Viking Dane axe, which was often used for hooking shields and controlling shields, had, according to manuscript miniatures and literary descriptions, not yet been introduced to the British Isles. 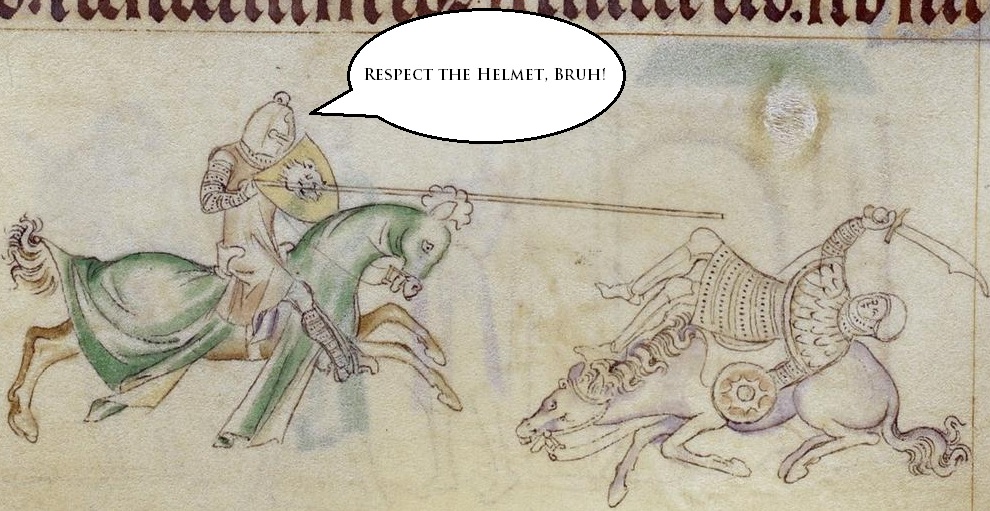 About the evolution of the shape of medieval helmets, Alan Williams and David Edge in their article “Great Helms and their Development into Helmets” tell us:

“European knights of the 11th century wore a conical helmet with a nasal for head protection; after about 1150 a round-topped version became increasingly popular, and after about 1180, a flat-topped version. From this date, all these types were sometimes fitted with a faceguard, to which was added a neck-guard, so that the conical helmet (which still remained in use) had evolved by around 1220 into a cylindrical headpiece, completely enclosing the head, called the «helm» (great helm, or «topfhelm» in German) which became the characteristic head protection for knights for a century or more.”[9]

But why did helmets evolve so? Perhaps the answer lies in need for developed physical protection. Physically protective features that separate the Benty Grange helmet from the Pembridge helmet are the construction materials themselves. While the seventh-century Anglo-Saxon helmet mostly consists of horn plates, the fourteenth-century English helmet is entirely constructed from a much more formidable material, steel. This difference may also be explained by noting the types of weapons each helmet would have to stand up against in a battle. By the fourteenth century, when knights like Sir Richard were fighting in the Hundred Years’ War, metal blunt impact weapons such as poleaxes and maces, as seen in manuscript miniatures, were common, and a helmet made of horn would arguably stand no chance in protecting the wearer against the strikes of such blunt impact weapons. In the seventh century, however, maces and poleaxes were non-existent on the English battlefield, which is also observable from manuscript miniatures, and a helmet made of horn might easily suffice against the blow of a sword or spear.

Whether or not helmets evolved from not protecting the face, being made of horn and having fixed finials in the seventh century to protecting the whole face, being made of steel and having detachable finials by the fourteenth century has to do with the parallel evolution of weapons is an easy assumption to make but is still conjecture no matter how plausible it may be. Not all Anglo-Saxon helmets from the seventh century failed to protect the face, however. This fact can be observed on the Sutton Hoo helmet, which is made out of mostly iron. Also, not every helmet from the fourteenthcentury protects the entire face, of course. This said, though, we cannot deny how much more effective the Pembridge helmet would be at protecting the face because it is made out of steel, or in other words specially treated iron which is stronger than untreated iron. Moreover, the edges of the eye slits on the Pembridge helmet are raised in order to strengthen them and are angled in such a way as to guide enemy swords away from the wearer’s eyes.

More facts we can rightly claim without conjecture to answer the question of how and why seventh-century Anglo-Saxon helmets were so different than fourteenth-century English helmets are that metallurgy and forging technology in the fourteenth century, of course, were more advanced than they had been in the seventh century, hence the Pembridge helmet being made entirely out of steel. Also, as evidenced by our two helmets’ iconography, visual language among the military caste had transformed from being partly pagan, partly Christian in the seventh century to being wholly Christian in the fourteenth century, hence the Pembridge helmet not having any pagan iconography.

To conclude, we should pay heed to the helmets’ similarities. A fact that will always remain the same is that however different these two helmets may be they were both used for the same reason, which is to protect the head against weapons—the same reason why helmets are used in battle today. Furthermore, both the Benty Grange helmet and the Pembridge helmet were purposely designed to intimidate the enemy through visual language. While the former uses the boar finial for this purpose, the latter is “deliberately sinister … to intimidate opponents.”[10] The fact that both helmets were associated with a burial suggests that they were worthy items and satisfactory at accomplishing their functions in their respective centuries.

Advertisements
Processing…
Success! You're on the list.
Whoops! There was an error and we couldn't process your subscription. Please reload the page and try again.