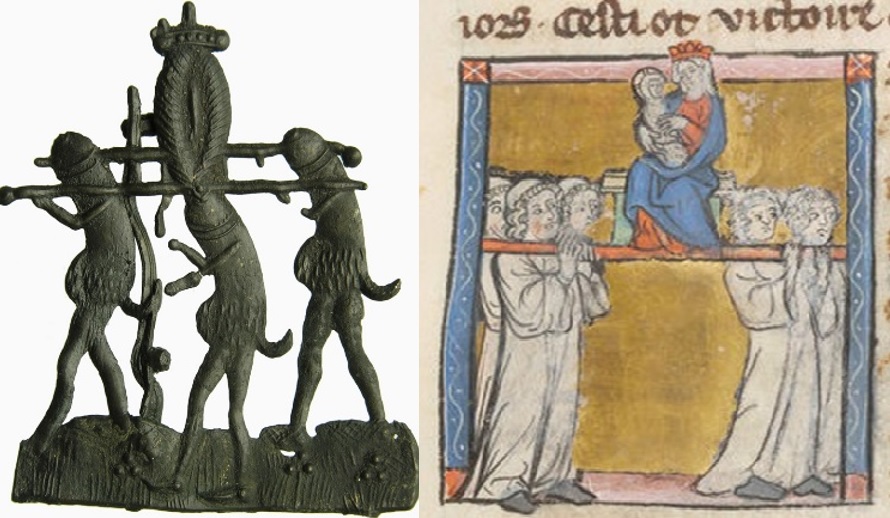 The Strangest Medieval Pilgrim Badge… Ever!

Depicting a phallus comically goes back to ancient Greece, at least. The Eurymedon vase, for instance, where a Persian is depicted exposing his buttocks to a Greek who is holding his phallus ready for use, symbolizes how the Greeks drubbed the Persians in the Persian Wars. In Rome, too, the fascinus or fascinum, the Latin word where we get our English word fascinate, was the object of worship for the Vestal Virgins. Interestingly, the club of Hercules, too, has been associated with the fascinus as an instrument of divine power, kind of like Thor’s hammer. From ancient Rome and the Middle Ages alike, hundreds of little phallic figurines and badges have been unearthed by modern people. These are the so-called flying penis badges, and they have been bewildering our scholars for the truth is yet uncertain. In better terms, these sexual figurines and pilgrim badges have been “fascinating” our scholars, making them wonder what in Hell was floating in the minds of the people who wore them let alone the people who cast and sold them.

For the case of our erotic Bruges badge, H.J.E. van Beuningen and A.M. Koldeweij, in 1993, wrote about the medieval theme of mock processions, such as Bosch’s Garden of Earthly Delights painting, and for our item that is what we may be looking at here–a mock procession–because the phalli here are clearly in a procession of some sort, carrying their object of “fascination” on a litter. On the other hand, M. Jones, in 2000, proposed that the crowned vulva should be viewed as a persiflage on the Virgin Mary. Also, Vrouw Minne, a Dutch symbol of lust like Venus, has, by Johan Winkelman, been named the culprit who this vulva symbolizes, but these are all speculations, albeit aged, insightful ones, and here is the latest one by yours truly below.

My thoughts to spit: Since this badge is made of pewter and not of a precious metal like silver or gold, it is more likely that it was not worn by a nobleman. Even though this badge might have a religious theme if it really is showing the Virgin Mary, it still could be a secular badge which would make more sense due to its lewdness. Certainly, I would be shocked and somewhat “fascinated” if pious monks or pilgrims were actually kissing such carnal objects in all seriousness. If it was a secular badge, pious clergy might be offended by seeing the Virgin Mother depicted so grotesquely and it might be prudent to avoid wearing this item in certain Christian contexts if one wanted to avoid getting scolded, at least in my understanding of the Middle Ages. Then again, the cult of the fascinus populi Romani in ancient Rome did worship such phallic objects, although this pagan religion was no longer active by the Late Middle Ages when this badge was made.

A paper by Jos Koldeweij titled “Notes on the Historiography and Iconography of Pilgrim Souvenirs and Secular Badges” (2012) makes an interesting visual comparison between the erotic Bruges badge and a 1516-1518 tapestry showing Charles V and his brother Ferdinand carrying a lady on a litter. Overall, it is safe to say the makers and users of such medieval phallus badges were thinking something us modern people may not be able to comprehend. Who knows? Maybe they did not think it was funny and a pilgrim really did wear it seriously. I doubt that possibility due its obvious bawdy nature. Either way, it is impossible to say for sure what the badge represents and who wore it, hence this attempt to explain for modern people.

To conclude, I strongly believe that this badge and others like it (a stone mold could pour up to 2,000 casts of the same badge in medieval times) is a secular, decorative piece worn by a commoner and it is most likely making fun of how noblemen depict themselves worshipping ladies, whether they be saints or noblewomen, by carrying them in a litter on their own shoulders, especially because the phalli have tails like dogs. But I very well could be wrong. Most erotic badges of this sort are found in and around Flanders, which might also give us hints if we were to look deeper into the context of Flanders in the Late Middle Ages–work for another day if someone else does not beat me to it.

What is your theory on this sexual pilgrim badge? I would love to read your opinion in the comments below. Feel free to speak your mind.