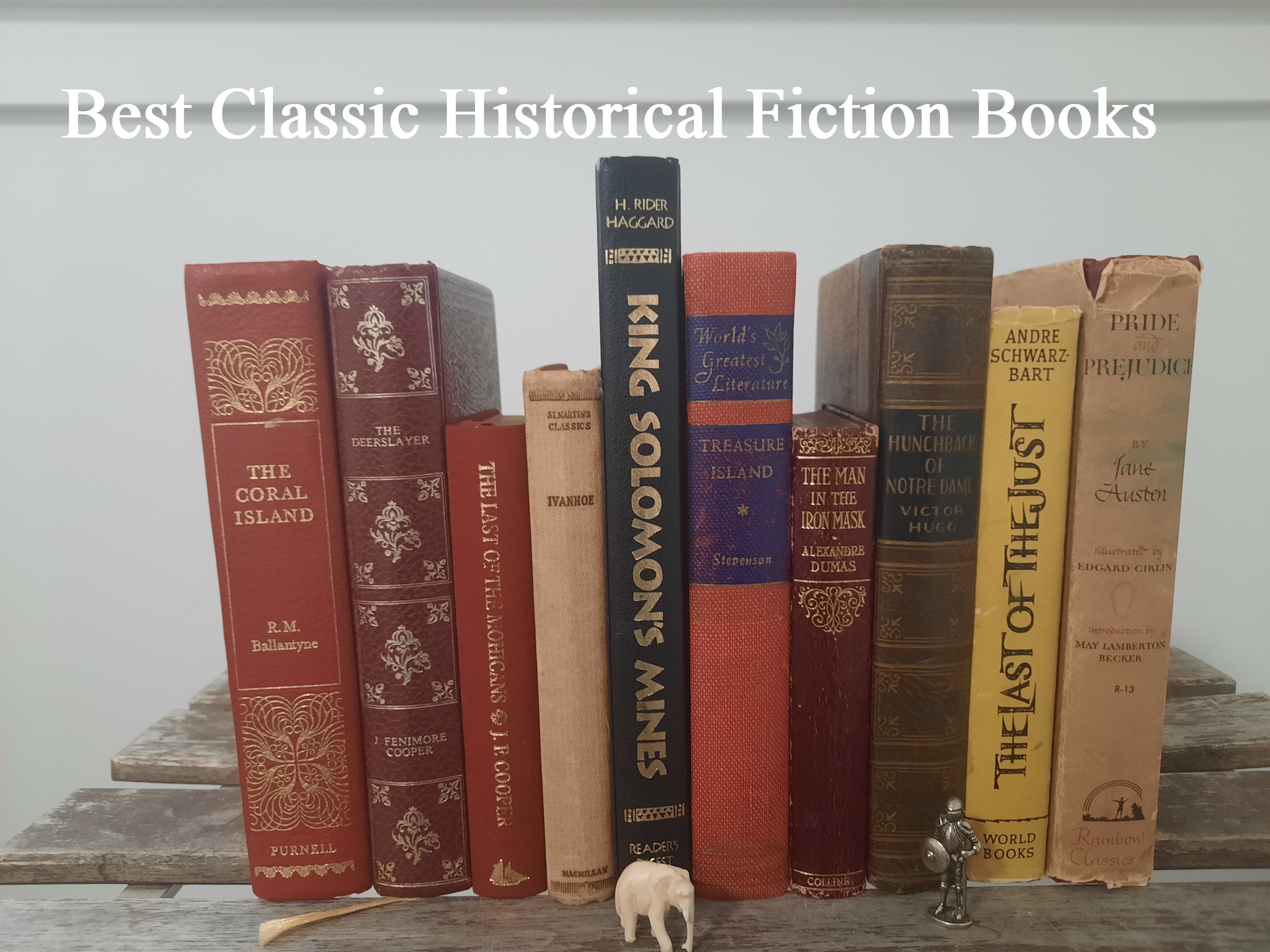 By the best classic historical fiction books I mean all those juicy 19th- and 20th-century must-read literary novels that you’d find in almost any bibliophile’s library predating 1960. Many of these historical fiction classics were written over a hundred years ago, world best sellers that will most likely continue to be read by history novel lovers a hundred years from now! Now, without further delay–

The Coral Island by R.M. Ballantyne

Set in 1840, The Coral Island explores the historical reality of the Pacific coral islands through the perspective of 3 British boys after a shipwreck. From sailing the high seas to fighting deadly cannibals, Ralph Rover and his friends must overcome challenges that landlubbers in the 21st century might find impossible to survive.

The Deerslayer by James Fenimore Cooper

Set in the early 1740s, The Deerslayer explores the brutal life of living in the wilderness of North America as isolated pioneers. More dangerous than the threat of cold and hunger is the native population who seek the scalps of European interlopers.

The Last of the Mohicans by James Fenimore Cooper

Set in 1194, Ivanhoe follows the story of a noble Anglo-Saxon family in an England ruled by Norman conquerors. In this romantic tale of medieval chivalry and revenge, Ivanhoe must find his new place in life after returning from the Crusades.

Set in Africa during the late Victorian era, King Solomon’s Mines showcases Europe’s 19th-century fascination with exploring the untamed wildernesses of Africa by following English adventurers in their search for legendary treasure.

Set in the mid 1700s, Treasure Island explores the brutal life of English sailors on the high seas. A search for pirate treasure quickly leads them toward unspeakable dangers on a secret tropical island.

The Man in the Iron Mask by Alexandre Dumas

The Hunchback of Notre-Dame by Victor Hugo

Set in the year 1482, The Hunchback of Notre-Dame explores late medieval Paris. A crookback bell ringer falls madly in love with a dancer who is out of his league, resulting in tale of jealousy, kidnapping and star-crossed romance.

The Last of the Just by Andre Schwarz-Bart

A time-twister that takes the reader from the 12th century to World War 2, The Last of the Just follows a Jewish bloodline through 8 centuries of history. This heart-wrenching story reveals the legacy of a Jewish family’s cruel persecution, from the Crusades to Hitler’s gas chambers.

Pride and Prejudice by Jane Austen

Set in Georgian-era England, Pride and Prejudice explores the historical reality of deportment and etiquette among aristocracy by following the romance between a country gentleman’s daughter and a wealthy landowner.

22 BEST Medieval SWORD Video Games (if you like Skyrim!)