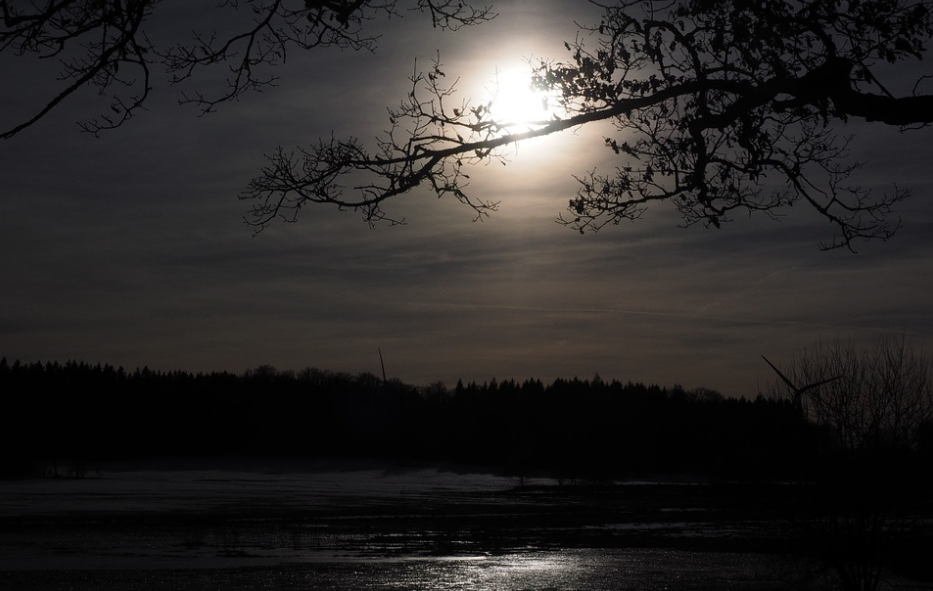 LitHEMA Short Story: “The Siege Within”

FLAP, FLAP WENT the webbed feet of a mother duck up a muddy, arrow-riddled bogside. The planets and stars of the midnight sky rendered the mud a dark, dark blue, but the bog itself was a pit of silky blackness sucking the starlight away.

Quacking desperately, the mother duck pronked back down the slope in fright as a score of screaming horsemen completed a circuit around the bog. Lost in the black water, a train of yellow ducklings answered her with frantic chirps, kicking through the thickness toward her voice. Looming high above them all was a crooked siege tower filled with anguished men. Like a shipwreck on Hell’s shore, the tower was groaning and creaking, taking volley after volley of arrows and bolts from distant castle walls.

This night could not have been more drear as yelps of cessation filled the air with a palpable misery. The wind carried the noises for leagues, and the distant trees seemed to shudder in response.

A dying man fell from the tower and splashed beside the ducklings. In the throes of the splash, the baby ducks resembled yellow petals tossing in a rapid river. Life meant nothing here. The man’s screams turned into bubbles as his armor carried him down deep to meet age-old skeletons below. Away from his flailing arms, the ducklings kicked with all their passion, swirling in waves of madness.

Out on the bogside, the mother duck craned her neck to show her babies a nervous eye, and quacked. Then without warning the screaming cavalry came around again and their galloping hooves kicked up a splash of mud that pushed the mother back down the slope. Soon she was floundering with her ducklings, quacking at their chirps in the waves, promising them all would be alright. She bit one by the scruff and used her wings to gather others. As she quacked at a few who had been tossed far away, she caught eye of a passing sparkle, turned to see what it was.

One of the circuiting horsemen was brandishing a sword above his head. The sword shimmered in the planetlight, a momentary flash—a spark of determination. He was wearing a black hauberk, and the twenty horsemen at his rear were clad in blackened plate. The silvery chanfrons on the heads of their destriers gleamed brightly like wraiths, turning blue and white and blue again in the planetlight. But they would turn red every time they passed the siege tower, for the tower had just been torched and was now blazing wildly.

Shieldmen and engineers had been trying to unstuck one of the tower’s wheels from the mud, but the screaming wraiths had cut them all down without mercy. Now the wraiths were throwing jeers and japes up at the men dying inside, wishing they had taken their time to enjoy this moment more.

The rider in the black hauberk made another spark of determination as he galloped under the crooked tower. Dirty men up in the loopholes bashed their shields in hatred. But no matter how angrily they bashed away, none of them were mad enough to jump down to the wraiths’ level. From the yon castle across the warground, arrows arced over the sky and bolts hissed long and true. Barreled shafts shattered off the wooden tower like sleet against a mountainside. Others hissed through loopholes and smashed cheekbones. This is the way it was when men worked in harmony with the laws of death.

The rider in the black hauberk was determined not to quit circuiting with his followers until the tower was toppled. After each circuit, he heard the tower’s groans become louder, felt the flames become hotter, and his smirk grew wider.

One man inside the tower knew he would die soon and so, through a machicolation in the floor, he observed the bog-dwelling ducks with a great sensation of love, placing his mind far away into a much more beautiful place. An arrow thudded against the wall by his head, but he didn’t flinch as he stared down, feeling the love inside him grow stronger. He smiled at the mother duck as an image of home lingered in his mind. Then a bolt hissed louder than a snake and made his head jerk back. Mind-muddled, he got trampled by the dozens of desperate men swaying about him in the cramped room like hungry hounds in a kennel. At least hope still lingered in another place.

Every time the mother duck felt like she was close to gathering her babies, another body would fall from the tower and scatter them all again. And as the rider in the black hauberk showed yet another spark of determination, the mother showed hers. Hope glistened in her watery eyes. She quacked and kicked and gathered her chicks all over again. She would not give up until her babies were safe.

One man in the tower had had enough. He crawled through a crevice in the wood and leaped down into the mud, his shoes making a great sucking noise when he landed. The fire at the foot of the tower was roaring now, and so the surface of the bog was limned with hundreds of snaking yellow streaks, no longer black. The light was dancing off the wetness, glistening and splashing around the angered man’s shoes as he trudged up the slippery slope. He swung his sword at a passing horseman, and the edge jounced harmlessly off the rider’s greave. Anger rising, he swung at the next rider. Now he, too, created a spark of determination as his sword flashed in the firelight.

The approaching rider saw the flash and directed his stallion with a push of his knee toward it, and the swordsman was thrown by the horse’s barded shoulder. He went rolling back down the slope and lost his sword before he splashed in the water. His spark had been bright, but now it was extinguished. He refused to get back up. He decided to lie here and stare at the planets. He listened to the chirplings. They sounded so close. If he lied here in the shallows and pretended to be dead, he could walk away in the morning. Such was his hope until a sudden loud snap heralded his fate. His eyes opened wide to see the tower tilting. It was falling right toward him. Forgive my life of sin, dear Almighty. In another life he would’ve tried to swim away, he promised himself, but not in this one. I deserve this more than anyone can possibly know.

The tower smacked the bog’s surface, devouring the sinner, and created an eruption of muddy water. The ejecta filled the air for a time, then came flapping back down in heaps as the tower, creaking and groaning like a capsized wreck, settled in its new place. Like wasps from a nest, men began to spew up out of the loopholes, and swords and axes hacked away to make new exits. Men crawled from the flotsam, gawping at the stars with faces raped by madness. One by one they came. One by one arrows and bolts from the commanding castle put them down again. Many slipped on the wet wood to drown in the water. A few who made it to the bogside were cut down by the wraiths. Soon the last man’s screams were quelled by the end of a broken lance.

The victor in the black hauberk remounted and led his wraiths away, disappointed not to feel the satisfaction he’d expected. He felt nothing but disgust.

When the galloping hooves were far, quacks and chirps began to dominate the atmosphere. The chirps were frantic and the quacks were distressed at first, but after a time they collected and quieted and settled. The ducklings were safe with their mother, waddling up out of the bog. Within a cozy tussock they nestled and closed their eyes to sleep. Somewhere yonder, another battle was beginning. That was sure. But here by the bog, everything was at peace, in harmony with the laws of life.

One thought on “LitHEMA Short Story: “The Siege Within””

The Bird of Wellimgale: A Funny Short Story of Daring Adventure