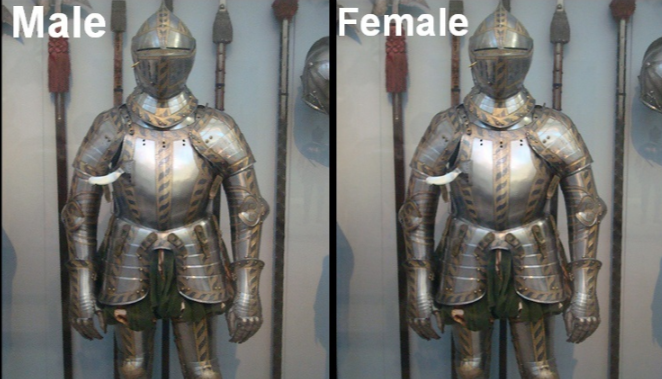 In my niche, a popular argument is circulating. Should fantasy be more realistic? One side believes fantasy should take pride in being unrealistic because, after all, it’s fantasy.

The other side thinks fantasy is awesome, but the unrealistic armour, fighting styles and architecture makes it not as good as it could be. They believe more realism can make fantasy more believable, and therefore more entertaining. I’m a gamer as well as a medievalist, so in a way I support both sides of this argument, though anyone who’s chatted with me could tell you I support one side more. For the bulk of this spiel, however, I’ll forget my opinion to explain this popular argument more thoroughly, or at least I’ll try to.

If this argument is new to you, I suggest watching these informative Youtube videos.

An example of wanting more realism in fantasy by Knyght Errant:

The Debate, shared through my eyes

One of the most popular sub-arguments in this grand debate is the squabble over how unrealistic hero-armour is. Often the armour you see in films is too revealing, showing bare skin, when in real life the hero would most likely try to cover as much of their body as possible. Women warriors wore just as much armour as men in real life, so you can see why historians would get upset to see Xena showing her cleavage in open battle.

Still, no matter how unrealistic Xena is, historians can’t deny that she’s awesome; that’s the whole point of fantasy for some. Fantasy is a way to forget function and praise form. But for someone who knows HEMA and history, it’s pretty hard to be entertained by fantasy if it’s so unbelievable that every sword fight, every super-sized pauldron, causes an eye roll.

Another example of popular unrealistic behavior in fantasy is having spikes on armour. In real life, you want your armour to be round so that strikes glance off it. Having loads of spikes on armour will make weapons hit you with more force. Rather than a sword snagging the horn on your helmet and driving force into your neck, it could simply glance off a rounded top.

In fantasy, especially in video games, swords go straight through hardened steel armour, when in real life, they barely make a scratch. If you don’t believe me, watch this: Skallagrim’s Bascinet Test

One thing that always makes me laugh is when the male hero wears nothing but a leather breechclout as he strides into battle with his shield behind his back. Take Conan as the perfect example. It’s acceptable because women want to see those big sexy pecks and those well-defined abs, mmmmm, but you’ll rarely catch a historian giving it praise for its authenticity.

I believe as knowledge becomes more freely available, youth who love fantasy are going to learn more and more about the real Middle Ages. Educated viewers and readers will want to see research and respect put into their entertainment. But I could easily be wrong.

So with all that said, what do you think? Should fantasy be more realistic?

Perhaps this is the opposite of a perfect balance for you. Some days, it’s the opposite for me, too. But most of the time, it’s realism that grabs me. Books like The Hobbit, I’d say, are 70% fantasy, 30% realism. Books like A Game of Thrones are 70% realism, 30% fantasy. So perhaps my preferred style of fantasy will be much different than what the wider fantasy audience is used to. As I get older and put more research under my belt, I could be craving a 90% realism type of fantasy. Is 100% even possible?

It’s amazing to see how the internet is changing expectations when it comes to what fantasy should be. Will warriors like Xena be acceptable on mainstream media in twenty years? Let’s wait and see.

Personally, I hope to see movies that take realism very seriously. I want to see masterpiece productions of medieval siege-craft displayed in great detail like never before. This one almost did it for me. But every once in a while, a totally out-of-this-world fantasy is exactly what hits the spot.

For my current take on what 90% realism fantasy might look like, check out my short story The Siege Within