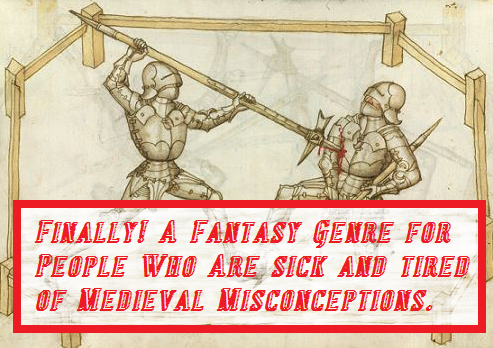 Everything has a polar opposite–everything!–and so if such things as LitRPG, where common sense and practicality are completely ignored, can reach the market of fantasy books then so will such things as LitHEMA, where common sense and practicality are praised. This is inevitable! In other words if I don’t work towards the fruition of LitHEMA then someone else will, and this new fantasy subgenre will win its place in the market by merit whether the vast majority likes it or not.

LitHEMA takes “realism” and “grittiness” one step beyond Grimdark. Like LitHEMA, much Grimdark may also be called low fantasy, dark fantasy or historical fantasy. There is something special about it that keeps certain readers with certain tastes coming back and back again. But what separates LitHEMA from all these similar genres?

The major difference between LitHEMA and Grimdark is simple: though Grimdark can be “realistic” and “gritty,” it does not necessarily have to display proper medieval arms and armor, proper medieval war tactics, realistic medieval culture, societal functionality, farming regulations, systems of law and order, et cetera. Most of all, though, Grimdark does not try to lessen the amount of multivalence. LitHEMA, in other words, forgets creative form and praises realistic function, as it tries so hard to accomplish these things in order to satisfy the reader’s expectations.

Multivalence, in this case, is where modern themes, ideas and beliefs are displayed alongside medieval themes, ideas and beliefs. It’s impossible to avoid this completely, just like it’s impossible to be 100% realistic, but with that said LitHEMA writers are still aware of this and adjust the actions of their characters accordingly. For a Grimdark writer to call his or her book LitHEMA, he or she would need to have an understanding of not only historical European martial arts but of medieval architecture, clothing, lifestyles, et cetera.

For as much as the use of HEMA in the genre’s title suggests it focuses on combat more than aught is equally untrue. Although LitHEMA may have more action and thrill than other similar genres like historical fantasy, it more so emphasizes realism in medieval times as a whole, including dress, manners, housing, politics, family structure, et cetera.

LitHEMA is much like medieval historical fiction, except the story does not need to take place on Earth, nor does it need to worry about Earth’s historical events, and, most exciting of all, it can have magic! With that said, however, the laws of our own universe, like the law of gravity, the law of cause and effect, the law of polar opposites, et cetera, are still at play in LitHEMA, hence a sword not being able to stab through a breastplate! In LitHEMA, if a sword stabs through a breastplate the reader will expect there to be magic involved, or else it’s merely bad logic on the author’s part and therefore isn’t LitHEMA to begin with, but rather Grimdark or another similar genre.

For the historical fiction reader who sometimes wished their author would throw in a few fantasy elements hither and thither, for the lover of elegant literary prose who is not overwhelmed by the use of archaic words or poetic language, LitHEMA is here to satiate their uncommon predilections.

In LitHEMA, magic is rare and mysterious, and since the laws of our own universe are already at play, the laws of magic need not be mentioned. Explaining the laws of a system of magic would only take away from the mysteriousness and awesomeness of it.

Like Grimdark, LitHEMA is not for the faint of heart, nor is it for the the reader who looks forward to a predictable “army of darkness” and an obvious “hero” because they know that in real medieval warfare there is no “good side” and no “bad side” but only nation against nation, man against man, whom both have good and evil within them.

Today people hang pictures of Napoleon and Caesar on their walls and say “look at these great geniuses,” yet they call it a sin to do the same for a picture of Hitler. Why is that? Yea, I ask you straightforwardly, why do we praise Caesar yet call Hitler an evil monster when Caesar, too, put countless Gauls to death in pure genocide? Perhaps it’s the passing of time that dulls our personal hatred? I will leave those questions for you to answer yourself, so that you may understand why traditional epic fantasy books, while imitating children’s fairy tales, contain obvious “good guys” and obvious “bad guys” while LitHEMA, while imitating reality, does not.

Those were some ramblings I needed to draw from my heart while I myself am still struggling to understand what LitHEMA really is, especially as the first LitHEMA book has yet to reach the market. If this genre sounds like something that would slake your unique tastes in fantasy literature, consider subscribing to my newsletter.