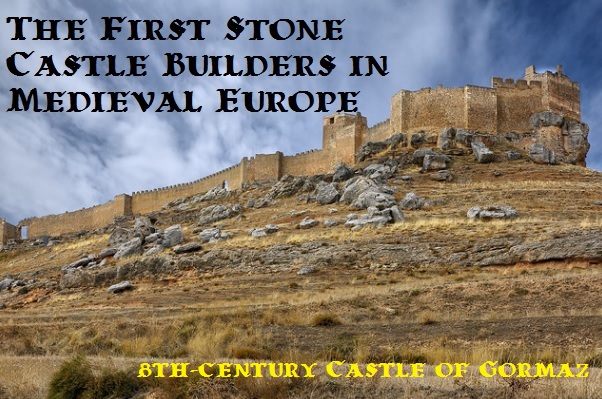 The First Medieval Stone Castle Builders in Europe were 8th-c Muslims, Not Normans or Carolingians!

Debunking Normans and Carolingians as the First Stone Castle Builders in Medieval Europe:

Stone fortresses with curtain walls, keeps, gatehouses and postern gates have existed in Europe for thousands of years before the Middle Ages. For instance, Mycenae on Crete (1350 BC) has all the characteristics of a medieval castle. Despite this, many scholars agree that the Normans were the ones to popularize castles in Europe, let alone medieval Europe. After all, the British Isles did not see many castles being built of stone until after the Norman Conquest of 1066, albeit these early castles were only used passively, meaning they were for protecting people’s belongings. With that said, the Normans are also credited by scholars for being the first medieval Europeans to give castles an active role, which means they used castles to advance in foreign territory and hold garrisons behind enemy lines. They did this famously during the First Crusade.

But is this claim that the Normans popularized the castle in Europe during the Middle Ages a myth? And were the Normans the first medieval people in Europe to give an active role to castles rather than just a passive role? To answer these questions, we will look at a medieval castle in Europe, namely the Castle of Gormaz, built by Muslims in Spain, see if it was used passively or actively, and compare it to a few Norman castles.

Before we begin it is important to remember a few things. This article is focusing on stone castles, not wooden ones or similar structures such as hill forts or fortified high places, otherwise we might be talking about the Celts and the Maiden Castle. And it is important to note we are focusing on medieval people in Europe, not those of late Antiquity. If the question was about Normans being the first Europeans in general to give active roles to castles then the answer would be no. All we would have to do to refute that claim is look back at Caesar’s conquest of Gaul and Britain in Antiquity where he built many castle-like fortifications (castra) to house his garrisons. Also, Carolingians were building stone castles in France as early as the 9th century, but we will be talking about even earlier stone castles. Finally, one last disclaimer should be mentioned. Kassiopi Castle on the island of Corfu has been said to have been built by Byzantines in the 6th century but this is not yet a fact. Other scholars say it was built much later. More on that in a bit.

Now, much like Knossos on Crete or Caesar’s castra in Gaul, the Castle of Gormaz, founded in the 8th century and completed in the 10th century near the Duero River of Castile, dominated the surrounding landscape.[1] Built of stone and ashlar on a high ridge with crenellated walls 1200 meters in circumference, the Castle of Gormaz has 26 square towers and a fencible keep in the bailey with its own moat, although many of these features were added over time as the castle upgraded through the centuries.[2] Unique to their Christian neighbors, this castle and others like it built by Muslims had what scholars call Moorish double horseshoe gates, albeit Peter Burton points out that “no sophisticated gateways were constructed at this early period,”[3] which might mean that the Castle of Gormaz lacked a winched portcullis and other advanced gateway features enjoyed by later Christian castles.

One Norman castle that enjoyed more advanced defenses was Kenilworth Castle which was originally constructed by Geoffrey de Clinton in ca. 1120.[4] Having started its construction by a Norman nearly 60 years after the Norman Conquest shows how the Kenilworth Castle played a passive role, much like Castello di Caccamo which was built by Normans in Sicily in the same century many years after the Norman invasion of Sicily. The 8th-century Castle of Gormaz, too, was built many years after the Muslim invasion of the Iberian Peninsula, so it should also be seen as a castle with a passive role, although it was used to protect a border and not just to protect possessions.[5]

But unlike these passive Norman castles which were used as residences and not purely for military use, early Islamic castles in Spain built from the 8th to 9th centuries were purely military with the purpose of housing garrisons in foreign lands.[6] After all, the Castle of Gormaz was just one of many stone castles built by Muslims in the Iberian Peninsula. So while this means that the Normans were not the first people to give active roles to castles during the Middle Ages they may still have been the first Europeans or Christians to do so. After all, the Crusades were a reaction to a pre-existing Muslim expansion, and Muslim castles were popping up in Europe long before Christian castles began to pop up in the Holy Land. While the Duchy of Normandy was not founded until 911, the Muslim invasion of the Iberian Peninsula began in 711.

Now, with all these things considered, perhaps it is a myth that Normans popularized the castle in Europe. Perhaps credit for being the first medieval people to build stone castles with active roles in Europe should go to the Muslims, because the Norman crusader castles with active roles in the 11th and 12th centuries were ultimately built out of a reaction to a more advanced predecessor, the Muslim stone castle builders. And if indeed Byzantines or another culture like the Visigoths were building stone castles in the medieval style before the 8th century then Muslims in Spain were still one of the first stone castle builders in Europe, and this would not refute the argument that Carolingians and Normans should stop taking credit for being the first. Once one looks at the Citadel of Aleppo founded in ca. 3,000 BC, it should not be surprising that traditional stone castle building technology came from the East.